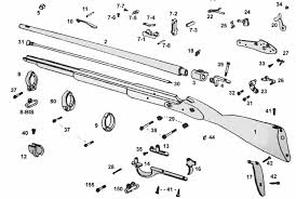 A manual for the interchangeable parts of a rifle.
Before the Industrial Revolution, there was no standardization for producing machine parts.  This made maintaining machines very difficult, as each was unique and any replacements parts would have to be specially made and fitted for any machine.  In 1801, Eli Whitney introduced a manufacturing method based on interchangeable parts: the idea being that if all individual pieces of a machine are produced identically, then the final products should be identical copies of each other, and replacing a single broken part is as easy as ordering the replacement.  Eli Whitney demonstrated this with firearms.  He brought ten of his rifles before congress, disassembled them, mixed up the parts, and reassembled ten rifles, none likely being composed of all the same pieces as before (Bellis "Whitney").  While weapons were not a driving factor of the Industrial Revolution, the idea of interchangeable parts certainly was.  All the previously mentioned inventions, such as steam engines, electromagnetic motors, and combine harvester could be mass produced and maintained with identical replacement pieces, instead of individual attention to every broken machine.
This process transformed America for an artisan-based nation to an unskilled, assembly line style producer.   This certainly increased productivity and eased costs of American expansion, but at the cost of losing much of the nation’s skilled craftsmen. The craftsmen’s methods were simple outdated; they couldn’t hope to keep up with the output of a factory, couldn’t offer such convenient repairs and maintenance, and had little hope of competing with factory-produced prices.  These factors drove most of the craftsmen out of existence, replacing them with disconnected, single part producing factory workers.  While contributing to the Industrial Revolution, Whitney’s idea of interchangeable parts also diminished America’s skilled craftsmen class.
Sources:
Bellis, M. Pioneers of the Machine Shop: Eli Whitney. About.com Inventors. Retrieved April 11, 2014, from http://inventors.about.com/cs/inventorsalphabet/a/machine_2.htm